>Mirror, Mirror on the Wall 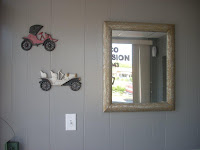 I took my car into a transmission shop for work. Usually the office where you check into for auto work smells oily, is dirty, old magazines, uncared for, etc. This place had fresh flowers in a vase, a small desktop fountain, immaculate floors/counters, and smelled good. I made a comment to the gentleman writing up my diagnostic paperwork about how “everything speaks” in the physical environment and makes an impact on the customer experience and I wanted him to know that his environment spoke volumes!
He pointed out that his wife was the one responsible for the front office and she knew this intuitively. The icing on the cake: she observed that most people coming into the office to have their car worked on were angry. Angry the car broke down, angry that it was taking longer to fix than they wanted, angry they were going to have to spend money to get it fixed – just angry! So, she put up a mirror in the little sitting area where they could see their angry faces.  He said it had worked wonders in changing attitudes because people don’t  want to look ugly and when you are angry, you are certainly not looking your best.

What a clever idea!

0
A successful business owner once told me that as soon as he gets a call from a customer ...
END_OF_DOCUMENT_TOKEN_TO_BE_REPLACED

0
Last week, I was invited to play pickleball in a private gated neighborhood community. As I drove up ...
END_OF_DOCUMENT_TOKEN_TO_BE_REPLACED

0
1. Share your vision of what exceptional service looks like for your department. 2. Show enthusiasm and energize ...
END_OF_DOCUMENT_TOKEN_TO_BE_REPLACED