>Tires Ain’t Pretty but at Tire Kingdom "Service" Is 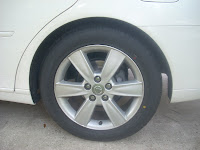 “Tires ain’t pretty” proclaimed the television commercial that played so long in Central Florida.  I had to buy a couple new tires last week.  Not fun, but you got to have them!   Someone recommended Tire Kingdom in Altamonte Springs, Fl. so that’s where I went.  (The power of referrals!)

Great experience from start to completion.  The staff followed what I call the ACT approach:

Not only were all staff pleasant, friendly and helpful, the place was clean and smelled good.  And, I even noticed that they provided “Advice” which is on Gallup’s survey of one million customers as the highest form of customer service.  On the front counter is a nicely printed sign that says if you are only buying two tires, it is best to have them placed in the back of the vehicle for better traction.  Now, that’s not something I would know or even think to ask about and obviously it creates more work for them as if you are buying two front tires, they know they will be asked to move up the current ones to the front.  But, its that little bit extra, that provides the added value that creates loyal customers.  And loyal customers refer others….

0
A successful business owner once told me that as soon as he gets a call from a customer ...
END_OF_DOCUMENT_TOKEN_TO_BE_REPLACED

0
Last week, I was invited to play pickleball in a private gated neighborhood community. As I drove up ...
END_OF_DOCUMENT_TOKEN_TO_BE_REPLACED

0
1. Share your vision of what exceptional service looks like for your department. 2. Show enthusiasm and energize ...
END_OF_DOCUMENT_TOKEN_TO_BE_REPLACED