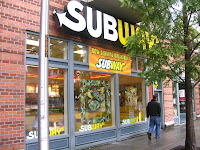 Going into a Subway restaurant that I had never been into before, I stood in line behind two other customers.  A young mother with a child in a stroller was at the counter and the employee (called “sandwich artists”) greeted her by name and asked if she wanted her usual – turkey on wheat bread with provolone.  She smiled and said “of course”.

The next customer in line was a big, tall guy wearing a Boston Red Sox baseball cap.  The employee greeted him by saying “Hey Joe, good to see you again.  Want the regular?”  Joe grinned and nodded.

I was next and when I got to the counter, the employee smiled, gave me eye contact and asked what kind of sub would I like.  As I gave the order and then followed him down the sandwich topping line, I asked him how he knew the names and orders of those customers in front of me.  He shared that he had recently been laid off from his company due to the economy and not wanting to sit around, he had found this job at Subway.  Initially he was very depressed about his stiuation; however, he realized that he was lucky because he had found another job.  He felt that because many  people are going through tough times that he would try and make a small impact on his customers’ day by making them feel special.  What can you do to make person feel special?  Remember their name!  And so he started learning and memorizing the names and orders of his frequent customers.  He showed me a scratch piece of paper he pulled from his back pocket where he would write down what they ordered and their name so that when they came in, he could greet them with a sense of familiarity.

0
A successful business owner once told me that as soon as he gets a call from a customer ...
END_OF_DOCUMENT_TOKEN_TO_BE_REPLACED

0
Last week, I was invited to play pickleball in a private gated neighborhood community. As I drove up ...
END_OF_DOCUMENT_TOKEN_TO_BE_REPLACED

0
1. Share your vision of what exceptional service looks like for your department. 2. Show enthusiasm and energize ...
END_OF_DOCUMENT_TOKEN_TO_BE_REPLACED